Going Beyond US WDYTYA

Who Do You Think You Are (WDYTYA) is the flagship show for genealogy in the United States. In each episode, the ancestry of a celebrity is explored, with prominent narratives from their family history investigated. It first aired in 2010 and began its fifth season last week.

Those in the U.S. who have Irish ancestry might be disappointed with the relative lack of focus on celebrities with Irish ancestry. In the first four seasons there has been 35 episodes. Four participants had their Irish ancestry partly or fully investigated, with three episodes showing research in Ireland. They are: 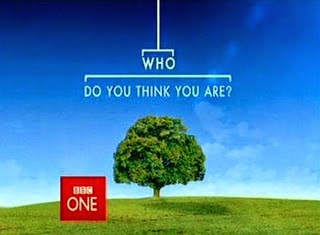 This is a small return, considering Irish is the largest ancestry grouping in the U.S. after German. Personally, I think there are two reasons for this. Firstly, it can be difficult to find the Irish place of origin. Other celebrities might have been considered, but their Irish place of origin might not have been found. Secondly, the Irish ancestors of some celebrities might not have been involved in something that was considered worthwhile for a TV show. Leaving a poverty stricken rural part of Ireland, living in a densely crowded tenement and dying of tuberculosis at age forty-five is not exactly going to see audiences flocking to watch the show. This could be called 'Cherie Blair syndrome.'

So, where can you get your fix of Irish genealogy on TV? Well, the US WDYTYA has an older British sister, as the show is also aired in the UK. The UK version is actually the original and has been on TV since 2004. The 11th season will begin in August, starting with a special show to mark its upcoming 100th episode.

The close proximity of Ireland to the UK has seen many Irish celebrities move to the bigger British market and many British-born celebrities have Irish parents, grandparents, and other ancestors. So, the UK version can be a great place to get your fix of Irish genealogy TV. Below, I have YouTube links to some of these episodes:

The Irish Genealogy News blog reports that the upcoming 11th season of the UK WDYTYA will have two Irish-focused episodes. While you may have know about the UK version of the TV show, you might be surprised to learn that there was also an Irish version of Who Do You Think You Are. It broadcast for two season in 2008 and 2009. I managed to find one episode knocking about on YouTube: