Compared to 2014, 2015 was a quieter year when it came to new developments and record releases in relation to Irish genealogy in North America. However, there were some very positive additions. The year kicked off in great fashion with the addition of editions of the Gaelic American newspaper on GenealogyBank.com and the release of Reproductive Loan Fund Records on Findmypast.

March saw the launch of a new website, Irishnewspapers.com, that allows people to pay in dollars for access to digitized local newspapers from Ireland. In the same month, the Ulster Historical Foundation had a very successful annual tour of the U.S. and Canada. They managed to fit in a phenomenal 15 stops in 17 days, no doubt taking planes, trains, and automobiles to get to all their destinations. They have already earmarked their 2016 tour, so watch out to see if they will be visiting a city near you.

Season six of the U.S. Who Do You Think You Are? featured actor Sean Hayes and his Irish-American ancestry. This was quite a good episode that showcased a number of detailed record sets in Illinois and Ireland.

The New York Public Library launched an interested website in November called Emigrant City. The website is an effort at crowd-sourcing the transcription of mortgage and bond record books from the Library’s collection of Emigrant Savings Bank records. Many of those who banked with the Emigrant [Industrial] Savings Bank were Irish immigrants and their descendants.


Lastly, the Irish Government released two documents this past year that have the potential to positively impact Irish genealogical research efforts in the United States and Canada. Global Irish: Irish Diaspora Policy and Local Diaspora Toolkit encompass a wide range of ideas and it is fantastic to see genealogy begin discussed in a government policy document. Read my two opinion pieces about these documents here and here.
Posted by Townland of Origin at 7:00 AM 2 comments:

The Ulster Historical Foundation (UHF) recently posted a lecture on their YouTube channel called "All Roots Lead to Chicago: Irish Railroad Workers and Canal Workers in the 19th Century." Debra Dudek of Fountaindale Public Library, Bolingbrook, Illinois and Tina Beard of Plainfield Public Library, Plainfield, Illinois travelled from the US to the Public Records Office of Northern Ireland (PRONI) where they presented the talk.

The lecture is divided into two sections: (i) where Irish immigrants settled in the states around the Great Lakes regions and what attracted them, and (ii) Irish immigration to the city of Chicago. Below you will find some of the main points of the talk, but I encourage you to watch the full lecture if you had Irish immigrant ancestors who settled in any of Minnesota, Wisconsin, Illinois, Indiana, Michigan, Ohio, Pennsylvania or New York.

Thanks to the UHF and PRONI for posting it online and the Irish Genealogy News blog for highlighting it last month.
Posted by Townland of Origin at 5:00 AM No comments:

Tracing The Irish In Washington State

The November/December edition of Irish Lives Remembered genealogy magazine has hit the virtual newsstand and in this edition I've written about research in Washington state. Don't forget, this magazine is completely free for anyone to read. 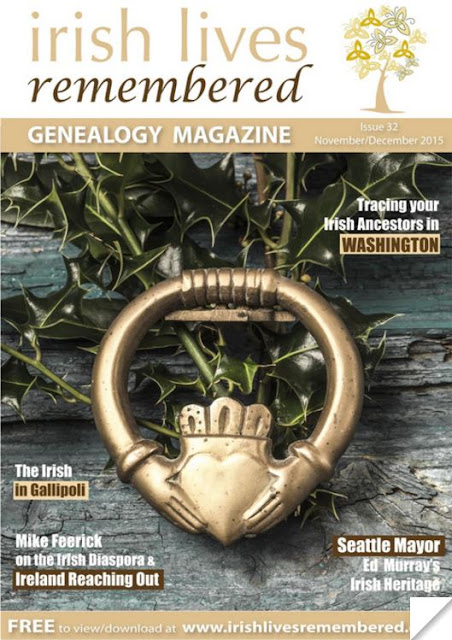 This is my last article for the magazine and I would like to sincerely thank editor Eileen Munnelly for bringing me on board almost two years ago.
Posted by Townland of Origin at 3:21 AM No comments:

The National Home (called Asylum up to 1873) for Disabled Volunteer Soldiers was founded in 1865 to look after volunteer soldiers who had been injured or disabled during the American Civil War. Twelve homes were opened across the United States, beginning with the first home in Togus, Maine in 1866.[1]

Both Ancestry.com and Familysearch.org have the database United States National Homes for Disabled Volunteer Soldiers, 1866-1938. It contains almost 400,000 records and the page for each veteran in the registers is divided into four parts: military history, domestic history, home history, and general remarks.  Just over 28,100 of the entries are for men who were born in Ireland. Of those, the Irish county or place of birth is recorded for almost 500 men.

Table 2: No. of records that give Irish county/place of birth

The questions asked on the pro-forma registers changed slightly over the years but a core of questions were asked throughout:[2] (i) military history - time and place of each enlistment, rank, company and regiment, time and place of discharge, cause of discharge, kind and degree of disability, when and where contracted; (ii) domestic history - where born (state or country and town or county), age, height, complexion, color of eyes, color of hair, read and write, religion, occupation, residence subsequent to discharge, marital status/social condition, name and address of nearest relative; (iii) home history - rate of pension, date of admission re-admission and transfer, condition of re-admission, date and discharge of transfer, cause of discharge, date of death, cause of death (iv) general remarks - papers, effects, location of grave and remarks.

Not every question is answered for each resident, especially in the records of those who were admitted to the first few national homes.  However, most questions were usually answered and this is a tremendous amount of detail about one individual, especially in the 19th century. It is also unusual to see a government document ask about the religion of a person.

To share one example, Austin Connelly entered the Central Branch home in Dayton, Ohio on 13 July 1875. He was born in Dublin, Ireland about 1810. In the United States, he worked as a shoemaker in Philadelphia, Pennsylvania. He first enlisted in the 109th Pennsylvania volunteers on 22 February 1862 at Philadelphia. He was discharged in 1863 before re-enlisting in the 116th Pennsylvania volunteers in February 1864. A relative was named as John Finnell of Camden, New Jersey. Austin Connelly died on 4 May 1891.[3]