Emigration And The Single Woman

@RTÉArchives is a very interesting twitter account to follow to learn about Ireland over the last 50 years. Last week, they tweeted about a 1995 Radharc documentary called Emigration and the Single Woman. This clip discussed the Mission of Our Lady of the Rosary for the Protection of the Irish Immigrant Girls that existed in New York City in the late 19th and early 20th centuries.

The records of this organizations are digitized and available for free online. They were quietly released in March 2014, of which you can read more about in my post from when they went online. Researching in them is a must if you have female immigrants from Ireland who came to New York during that time period.

Emigration and the Single Woman, from Radharc via RTÉ Archives.

Unless you have been under a rock for the last two weeks, you will know all about The National Library of Ireland's brand new website for Catholic parish registers. Simply put, it's a joy to use. There has been plenty of coverage all about it so there is no need for me to rehash it all. So what can researchers in the U.S. and Canada get from the website? Well, the most obvious benefit is free, unlimited access to digitized images of the registers. That's a no brainer.

Beyond that, there are some other benefits that will be of particular use to researchers who are tracing immigrant Irish ancestors. Genealogy research is all about trying to get original records, or if that is not possible, a photocopy, picture, or digital scan of the record; it allows a researcher to see all that has been written on the document. This includes all the necessary information needed to create the document and any possible notations, later amendments or commentary that has been added by the record creator or another party. Having access to digital scans of the Catholic register microfilms allows a researcher to do this.

This ability can be very useful when we consider the possibility of Ne Temere positively impacting on our research. Ne Temere was a decree of Catholic matrimonial law in relation to marriage, with one part stipulating that all marriages must be registered in the place or places where the contracting parties were baptized.[1] With Ne Temere coming into force in 1908, conceivably, it can be expected that such register amendments will be found from about 1848 to 1890, if a person who is born in Ireland gets married in the U.S./Canada between the ages of 18 and 60.

Some examples of this are evident in the registers. The following entry is found in the baptismal registers of Kilmore Erris parish in County Mayo:

Another example comes from Keel parish in County Kerry:

With this example, the proof of this later addition can be seen in the index for marriage records from New York City[4]

Other interesting notations that can provide possible clues about immigration to the U.S. are also evident, such as this example, also from Kilmore Erris parish:

If you come across a relevant entry in the registers, make sure to examine closely around it and elsewhere on the page for such notations and additions.

Posted by Townland of Origin at 5:00 AM 3 comments:

Tracing The Irish In Missouri

The July/August edition of Irish Lives Remembered magazine is out and in this issue I've written about Irish genealogy research in Missouri. Click here to access this free magazine. 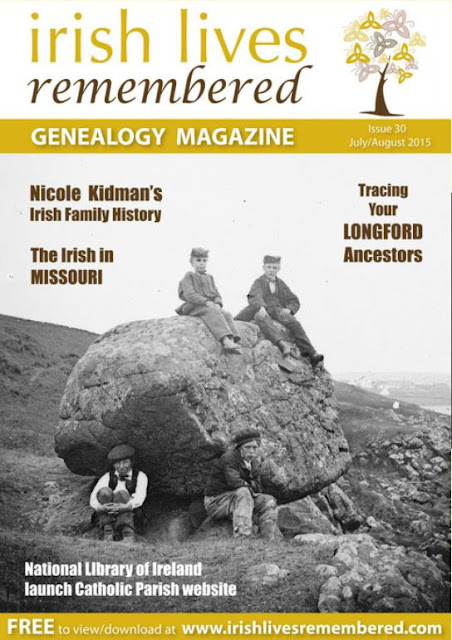 Posted by Townland of Origin at 5:43 AM No comments: