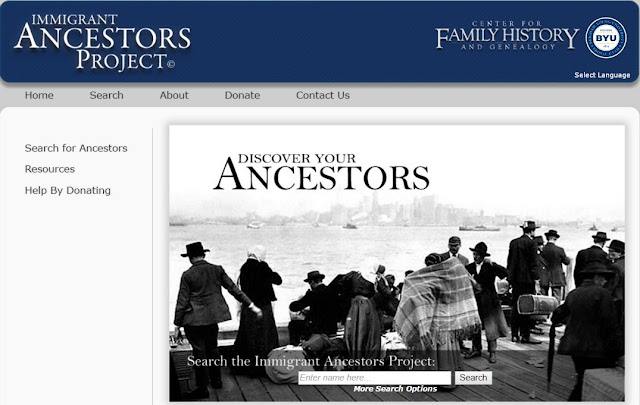 
[1] Center for Family History and Genealogy. Immigrant Ancestors Project. 2014. Available online at http://immigrants.byu.edu/about/iap: accessed 6 May 2016.
Posted by Townland of Origin at 5:00 AM 36 comments:

My recent talk about introductory genealogy resources in the United States was kindly recorded and is available to listen to as a podcast. Many thanks to the Eneclann / Irish Family History Centre staff for recording it and making it available.

Listen here.
Posted by Townland of Origin at 5:00 AM 5 comments:

Last week, I profiled the genealogy holdings and services at the Maine Irish Heritage Center (MIHC) in Portland. The jewel in the crown at MIHC, though, is undoubted the Maine Gaeltacht[1] DNA Project.

It was started in 2011 and is essentially an attempt to trace the genealogy of Irish immigrants to Maine via the traditional paper trail and DNA. To date it has collected information on more than 142,000 such immigrants and their descendants and 535 people have participated in autosomal DNA tests.[2] The well known Irish genetic genealogist, Maurice Gleeson, has described it as "the most advanced DNA project of its kind in existence."[3]

The project is named so due to the high number of Irish immigrants who came from the Irish speaking areas of County Galway, such as Connemara. What makes the project even more valuable is that many people from Connemara have submitted samples for DNA testing.

The project was profiled in the Portland Press Herald newspaper back in March. The article gives an excellent overview of the project and what it has achieved so far. Members of the project traveled to Ireland last year to present a lecture at the Back to Our Past Genetic Genealogy Ireland conference. You can watch that presentation below (53 mins).

If you want to participate in the project you can contact the MIHC online.

U.S. Genealogy Talk At The National Library Of Ireland

Next Saturday, 14 May, I'll be speaking about U.S. genealogy at the National Library of Ireland, Dublin. The talk begins at 2pm and there will be a bit of chat and a cup of tea or two afterwards at Buswell's Hotel, across the street. All are welcome to attend. More information.


Synopsis
Almost 3.8 million people immigrated to the United States of America from Ireland between 1851 and 1921. Millions more arrived on the shores of North America in the decades and centuries before those years. Therefore, practically every Irish-born person today has an ancestor who can be traced in American genealogy records. This talk will provide researchers with an overview of the main record sets that should be consulted when beginning genealogy research in the U.S. The backbone of American genealogy, the Federal Census, will be discussed in detail, along with the less well known state censuses. Civil registration, or vital records as they are known stateside, will be explained along with where to apply for those all-important birth, marriage, and death records. Immigration and naturalization records will be the focus of the concluding parts of the lecture.

Posted by Townland of Origin at 5:00 AM 4 comments:

UPDATE 31 May 2016: See the Irish Genealogy News blogpost about this topic before reading.

Last November, the Familysearch blog outlined that the most requested microfilms at the Family History Library would be digitized, with access to the images available through the Familysearch Catalog. Before this, digitized records were, and still are, found in the Records section, with the Historic Record Collections list the quickest way to identify records of interest. Digitized record sets have the image of a camera beside the title. Just like in the Records section, selecting on the camera icon in the Catalog listing will allow you to view any of the newly digitized records.

The plan to digitize microfilms and place the images in the Catalog has very quickly provided an unexpected boon to Irish genealogy research. Two weeks ago, John Schnelle contacted Claire Santry about the availability of digitized Griffith's Valuation House, Quarto, and Field books (read the blog post here and access the Catalog listing here).

As well as the Valuation Books and wills, there are other microfilms that have been digitized, for example:

The Family History Library obviously has a  huge collection of microfilmed Irish records and it is very likely that other interesting records have been digitized. As such, the Familysearch Catalog should now be a mandatory place to look online for digitized Irish records. Of course, this digitization project is not just confined to microfilms of Irish records. It therefore offers a new and exciting research path for people researching ancestors who immigrated to the United States, Canada, and elsewhere, as microfilms of records from other countries are also being digitized.

If you have not used the Familysearch Catalog before then follow this step-by-step.

The Maine Irish Heritage Center (MIHC) was founded in 1997 when the City of Portland generously donated St. Dominic's Roman Catholic Church to the Irish American Club and Friends of St. Patrick. Today, the mission statement of the organization is threefold:[1]

This last point encompasses a number of facilities within the MIHC that have seen it become one of the best places to go for Irish genealogy in the New England area. Volunteer genealogists are available to help you get started to assist in trying to break through those brick walls. Members get a complimentary consultation with a genealogist and there is a very affordable member and non-member fee schedule for further research. Genealogy workshops are also held throughout the year.

The MIHC library contains over 2,000 volumes, including city directories, yearbooks, obituaries, and St. Dominic’s school registers, along with access to online genealogy resources. There is an online library catalog to get started with their holdings. The MIHC archive contains some fascinating collections, including oral histories with Irish immigrants and Irish Americans in Maine.

You can visit the MIHC in person at the corner of Gray and State Street, Portland, ME 04112-7588 or online at their website. This organization is an absolute must to visit or interact with if you have Irish ancestry in Maine.