I have two talks coming up next week, details of which you can find below.

Tuesday, 6 September: Ten free websites for U.S. genealogical research
This is part of the lunchtime series at the National Library of Ireland. It starts at 1pm and is free to attend with no booking required.

Thursday, 8 September: Tracing Galway's Emigrants in the United States and Canada
I will be giving this talk at the Emigration and our Galway County Diaspora conference. There is an excellent lineup across the day and my talk is at 3:45pm. The conference is in Clarinbridge and is free to attend. 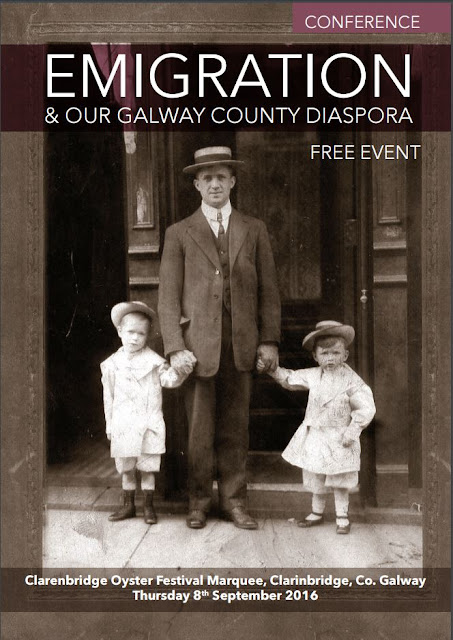 The first three Catholic parishes founded in Toronto were St. Paul in 1822, St. Michael in 1845, and St Mary, seven years later in 1852. The Church of Jesus Christ of Latter-day Saints was granted access to the Archdiocese of Toronto archives some years ago and microfilmed the registers of various parishes, including the first three, up to 1910.[1] This microfilming program has been converted into the browse only database Ontario, Roman Catholic Church Records, 1760-1923 on Familysearch. After selecting the database, navigate to → York→ Toronto. This will bring you a list of digitized parish registers.

It is worth the effort to consult these registers as Irish parish and county of origin information it often provided for marriages beginning about 1850. Failing that, many marriage register entries provide the parents' names for marrying parties.

In 1850, Neil Mallen from Dickmancreven [sic - probably Tickmacrevan] Parish, County Antrim married Margaret Brian from the parish of Hackettstown [sic], County Wicklow in St. Paul's parish. Both of their parents are named in the register entry.[2] An example from St Mary's parish shows John Cleary from County Clare married Catherine Cawley from County Tipperary in 1862. Again, both sets of parents are named.[3] Similar information is found in the entry directly after John and Catherine's.


Toronto is a central location for those who may have intended to travel into the rural areas of Ontario, New York State, or the American mid-west. Equally, those Irish immigrants may have stated in the city. If you have been unable to find marriage or baptismal records for your ancestors who ended up in those regions then don't discount the Toronto Roman Catholic registers.

Access these three parish registers and those from many other parishes in Ontario here.

The Friends of Irish Research (FIR) is a genealogy society based in Brockton, Massachusetts. The organization was based at the Irish Cultural Center (ICC) in Canton for a number of years before moving to their current residence at 900 North Main Street in Brockton. FIR meets often with get togethers held almost every Friday evening for two hours at their Brockton location, beginning at 7:30pm. Anyone is welcome to drop by for a genealogy consultation during that time, once they make an appointment via email
(friendsofirishresearch@gmail.com). On the third Friday of each month they return to their spiritual home at the ICC Library in Canton to meet. 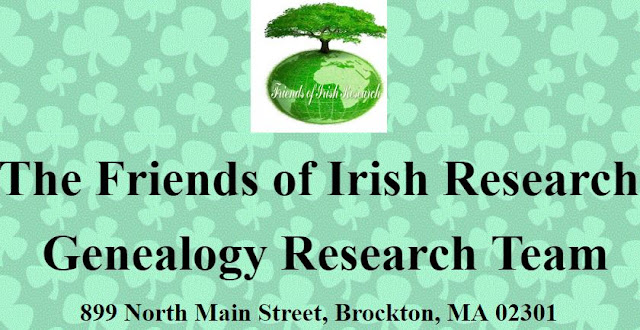 Like all good local genealogy societies they are utilizing one of their strengths by creating records from local resources. Old St. Mary's is the oldest Roman Catholic cemetery in Canton and FIR have created a database of burial information.


Next month they will be hosting their latest School of Irish Genealogy on Saturday the 10th. Running from 1-4pm, the afternoon will focus on free online research tools and DNA. Previous editions of this venture have focused on a wide variety of topics for which there are handouts and videos available . There is also a considerable range of articles available to read, focusing on areas such as research in Newfoundland, Cape Breton (Nova Scotia), and beyond.
Posted by Townland of Origin at 5:00 AM 2 comments:

One year ago I compiled a list of Roman Catholic parish registers that are available online. As I outlined at the time it was, sadly, a short list. However, it was well received so I'm back with an updated list for 2016. Most of the updates for this year come from the Drouin Collection, along with a couple from the Internet Archive website. New additions are in bold in the table.

Another access method for Roman Catholic parish registers that is sometimes not considered is microfilms from the Family History Library in Salt Lake City, Utah. Eventually, all of their microfilms will be on Familysearch.org, but until that point is reached they remain a great way to access these records. For example, see the list of registers for 12,000 (yes, 12,000) parishes around the world.

Posted by Townland of Origin at 5:00 AM 6 comments: