The state of Maryland has had a long association with Catholicism. In receiving a grant of charter for a Maryland colony, Cecilius Calvert, 2nd Baron Baltimore in the 17th century, aimed to create a new colony that was to be a haven in America for Catholics.[1] The first diocese in America was created as the Diocese of Baltimore in 1789. It is interesting to consider that this Catholic heritage is a possible factor for the unusual circumstance, when compared to other state archives, that the Maryland State Archives has a considerable collection of Catholic Church records and parish registers.

The reality though, is probably more to do with good foresight, as the introduction to the Maryland Religious Records special collections reads: since systematic recording of vital records was not established until 1875 for Baltimore City and 1898 for Maryland counties, religious records are often the only source for birth and death information.[2] 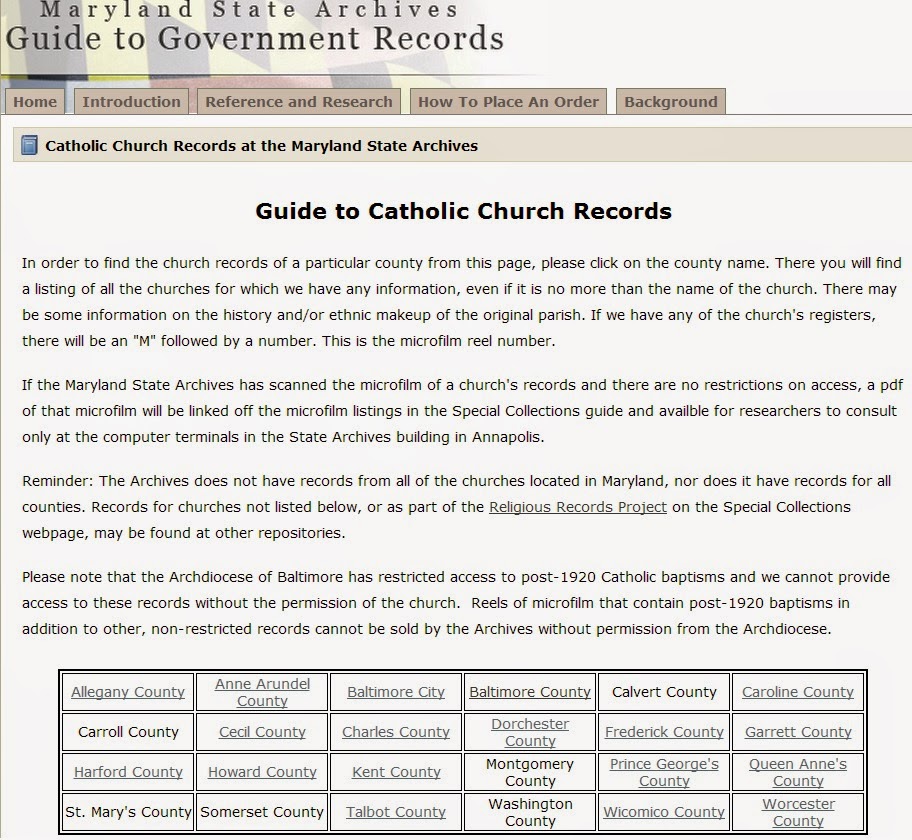 The best place to start is the Guide to Catholic Church Records webpage on the State Archives' website. This guide helpfully divides all their Catholic Church records by county. Most counties in the state are represented in this guide. Basic, but useful notes are provided for the majority of entries. For example: St. Patrick's, Cumberland [Allegany County]:  Established in 1790, it originally served the entire county. Many of the early parishioners were Irish immigrants, who came to America to work on canal projects.[3]

Extensive detail is given about the parishes in the city of Baltimore. The guide divides this information into four time periods between 1750 and 1950. This is due to the changing boundaries of the city and different parish boundaries before 1884. Where known, parish ethnicity is noted as immigrants worshiped at a parish of ethnicity (e.g. Irish, Polish, Italian) as opposed to their nearest parish church.

For some parishes, you can consult parish register transcriptions in pdf format at the State Archives building. You can visit the Maryland State Archives in Annapolis, the state capital.