Artifacts left by early 19th century Irish immigrants can often be few and far between. One rare example is this piece of pottery at the Smithsonian Institution in Washington, DC. 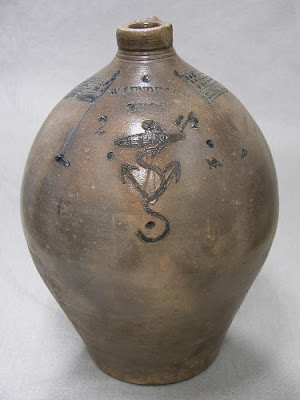 It was made by William Lundy and “the unusual decoration on this jug features two American flags and an anchor.”[1] Lundy worked as a potter in Troy, NY and was most active in the 1820s.[2] Many Irish immigrants came to this part of New York State in the first half of the 19th century, attracted by the developing industries in Troy and nearby Albany.

You can view the artifact in more detail on the Smithsonian website. If anyone is a descendant of William Lundy, or knows where he came from in Ireland, it would be great to hear more about his life in the comments section.