I came across this amazing image of an Irish woman, Mrs. Thomas McKessy, Limerick, and her ten children arriving at New York in 1926. The caption says she had 21 children in total! The full New York Times article (which is unrelated to the picture), by the well know Irish author/playwright John Banville, can be accessed here. 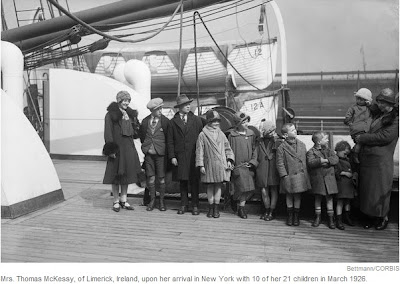 Their 1926 passenger list (part 1) gives the names of all the McKessy children on the ship.[1] It further outlines that the family was from Newcastle West. The family sailed from Cobh (Queenstown), Co. Cork on 7 March, arriving in New York. Their father Thomas was already in New York, living in the Bronx (passenger list, part 2).

When enumerated in the 1930 census, Thomas McKessy, his wife Sarah, and nine of their children were still living in the Bronx.[2]  Daughter Johanna, then aged about twenty, was not listed with the family. In the 1911 census of Ireland there is a family living in Newcastle West that has matching parents' names, their ages are broadly correct, and have numerous children.[3] Two of the children's names, John and Johanna, also match, based on ages listed on the passenger list and both censuses.

All the rest of the children on the 1930 schedule had not been born when the 1911 census was taken in Ireland. By 1911 this Sarah McKessy had given birth to eleven children, of which eight had survived.

If this is the correct family, did she really have a remarkable twenty one children? Or was it "just" nineteen (including the three children that did not survive childbirth)? What happened to the other two; did they die in childbirth too, between 1911 and 1926?

Regardless, how many descendants do all these McKessys have today!?

Posted by Townland of Origin at 10:00 AM