Above And Below Deck

Sailing from an English or Scottish port to North America was the route of choice for many Irish emigrants. However, they first had to get to that port before embarking for the U.S. or Canada. The two pictures below, Departure of the "Nimrod" and "Athlone" steamers, with emigrants on board, for Liverpool and Emigration Vessel—Between Decks, show two such ships leaving Irish ports and the cramped conditions experienced on emigration vessels. They were published in the 10 May 1851 edition of the Illustrated London News. 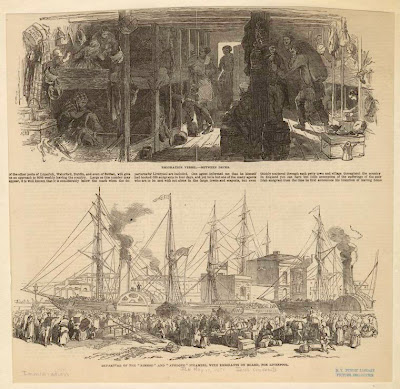 The section of text from the accompanying article reads: "… of the other ports of Limerick, Waterford, Dublin, and even of Belfast, will give us an approach to 5000 weekly leaving the country. Large as this number may appear, it is well known that it is considerably below the mark when the departures for Liverpool are included. One agent informed me that he himself had booked 600 emigrants in four days, and yet he is but one of the many agents who are to be met with not alone in the large towns and seaports, but even thickly scattered through each pretty town and village, throughout the country. In England you can have but little conception of the suffering of the poor Irish emigrant from the time he first announces his intention of leaving home..."