New Orleans Irish, Arrivals – Departures was written by John Finn and published in 1983. Finn was a Roman Catholic priest from County Sligo who was appointed to a parish in New Orleans, Louisiana. He quickly became intrigued by St. Patrick’s Cemeteries in the city and the history of the Irish who immigrated to New Orleans over the previous 180 years.

His publication primarily consists of a few thousand entries that Finn gleaned from headstones in the three St. Patrick’s Cemeteries. Finn recorded all information from the headstone, including Irish places of origin and birth, where found. Many of the burials occurred in the 19th century. For example, Ellen Donnelly, died on 4 September 1865, age 24 and was buried in St. Patrick Cemetery number two. She was from Killoran, County Galway.[1] Useful cemetery maps and pictures of some of the headstones are also included. 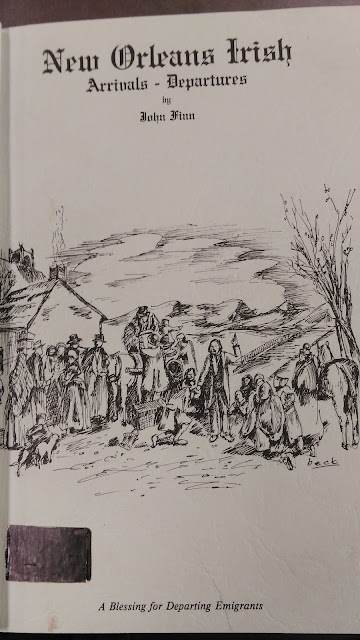 Finn also transcribed Irish immigrants from passenger lists of ships that arrived in New Orleans. The listing is not comprehensive but entries are taken from the years 1815 to 1847.

New Orleans does not initially come to mind when Irish immigration to the United States is considered. However, as pointed out in David T. Gleeson’s The Irish in the South, 1815-1877, the Irish population of the city in 1850 and 1860 averaged just over 15%.[2] By 1860, this considerable percentage consisted of 24,398 immigrants from Ireland.[3]