The 69th Head Off To War

This picture shows the 69th Regiment, New York State Militia boarding the James Adger in 1861. It was originally published in Harper's Weekly: A Journal of Civilization. 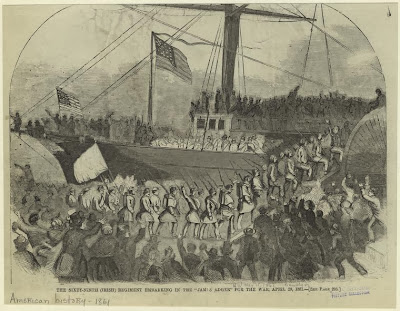 The caption reads: “The 69th (Irish) regiment embarking in the “James Adger” for the war, April 23, 1861.” Someone has written “May 11 1861” and “Brooklyn” above the caption. They are being cheered by a sizable crowd and one solider is holding a flag with what looks possibly like the emblem of a harp on it.

If you have an interest in the participation of the Irish in the Civil War then you should consult the excellent and aptly named website, Irish in the American Civil War.

Note: Thanks to Harry Smeltzer of the Bull Running's blog for pointing out that this is a picture of  the 69th Regiment, New York State Militia and not the 69th Infantry Regiment (New York).
Posted by Townland of Origin at 5:00 AM